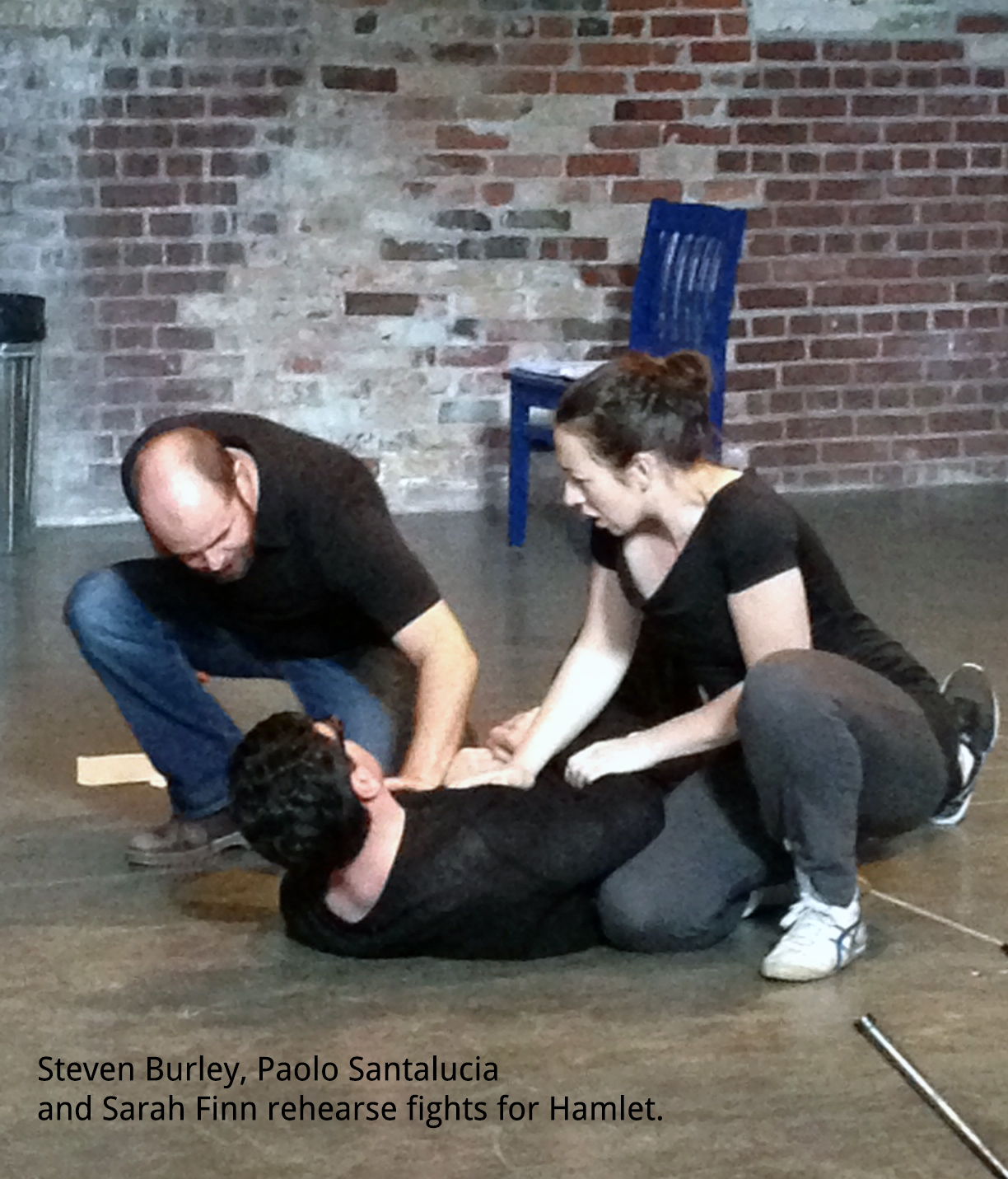 Myekah Payne is the Assistant Director of Hamlet. Though she has logged plenty of time on the stage, this is her first time on the other side of the action at the Director’s table. Currently she is finishing her degree at York University specializing in the study of Dramaturgy. This study is what spurs her fascination for development and re-imagining of the classics. Read on for Myekah’s tales from the rehearsal hall… It’s Myekah just giving an update as we move now through our second week of rehearsal of Hamlet for the Bard’s Bus Tour.

As we began our first week of rehearsal, the daily morning routine was quickly established. After all morning pleasantries, the cast is seated and our Director Jeremy leads us all in a moment of meditation.  This moment every morning helps everyone to bring their awareness into the space, and to focus for the ever busy schedule to come.

This is usually always followed by a movement warm up led by Richard Lee and/or Adriano Sobretodo Jr. These warm ups consist of fun games to get the body moving and the mind active. There is nothing more motivating and energizing than quick reaction memories games (zip,zap,zop) especially when the penalties for screwing up include push-ups and jumping jacks. After movement comes a vocal warm up with music director Tom Lillington. Though our cast is amazingly talented, vocal music isn’t always at the tippy top of the skills list. However, under Tom’s direction the actors found new confidence in their singing abilities. Through sound-building exercises Tom has begun creating the original soundtrack for Driftwood’s Hamlet.

Using only vocal sound, rhythms and vibrations the cast quickly learns three part harmony in nasal overtones. Every music rehearsal new sounds and harmonies are explored. Repetition has already found some constant themes that are truly haunting. As said before much of Driftwood’s work is about exploration and these soundscapes are a fluid exploration from rehearsal to rehearsal.

Exploration are not only made in sound but also through Toby Malone’s adapted text. Even when actors were not being blocked onstage, they were constantly working on and through their text. If you looked around the hall at any given time you could find someone like Natasha Mumba (Ophelia) memorizing in an upstairs room or Sarah Finn (Horatio) doing scene work outside. Even now as we move ‘off book’ you can still find really any cast member looking up words in one of four lexicons floating around the room at any given time. And if that doesn’t work, you will find me on Google Books trying to help with whatever obscure volume that I can find. The text work is endless and wonderful when it comes to Shakespeare, not to mention this variation of Hamlet. However it is essential to make sure everyone understands fully what is being said. 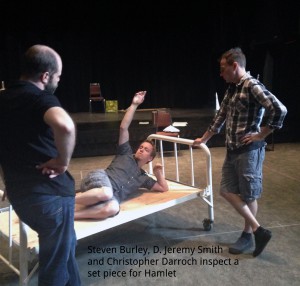 With all the text work, vocals, and blocking, the movement within the piece is never neglected in rehearsal. As I stated previously every morning the actors are guided through a body warm up by movement co-directors Richard and Adriano. However many times, after the fun, the cast is asked to explore themes through their bodies. These movements are used or are reimagined for different moments and transitions within the play. Much like the vocal music being created this is also just as explorative. Watching the company embody fear and grief during one of these
exercises was quite moving and visceral.

By the end of the first week rehearsals we’re growing in momentum. Scenes were being expertly blocked and layered. Characters were being honed and developed through script and scene work. Hamlet and Leartes fought to the death numerous times (some of those times with actual swords).  Kind of like a puzzle where you put together all the doable pieces first, the show shakily started taking shape. 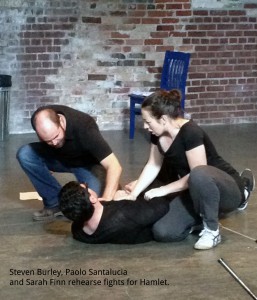 That first week was a whirlwind and even though scenes were taking shape the play still seemed really disjointed in rehearsal. Not always having the full company every day meant many of the scenes had to be rehearsed out of order. So at times it was hard to remember how the full action of the play would come together. Finally having transition day really gave a glimpse into what was coming.

During these transitions, Tom began adding in bits of musical themes, getting the company singing and adding vocal rhythms. Richard joined in the process, choreographing movement to layer on top of the sound and shifting scenes. Until all of a sudden, I am, as the audience, in the king and queen’s bed chamber during a romantic moment while the eerie fear theme drones out from cast. Other moments pass and all of a sudden I am listening to a dance worthy beat boxing theme of hope as the players set up and re-enter for their second chat with Hamlet in Act III Scene II.

Rehearsals are on for a few more weeks and we have yet to do a full stumble through but Hamlet is on his vengeful way. And I must say that this year Driftwood has “the best actors in the world, either for tragedy, comedy, history, pastoral, pastorical-comical, historical-pastorl,tragical-historical-comical-historical-pastoral” and pretty much everything in between. Here’s to two more weeks of rehearsal till opening!

The actors are come hither…

Surviving the Tour, or: I Love Your Silly Faces
Scroll to top