The actors are come hither…
The best actors in the world, either for tragedy, comedy, history, pastoral…
Hamlet, Act 2, Scene 2

Rehearsals for Hamlet started this week. It’s always a thrilling time, full of possibility. Before we jumped into the first week’s work of table reads and meet-and-greets and design presentations, I wanted to take a moment to reflect on the process of bringing this incredible group of actors together for our summer tour. 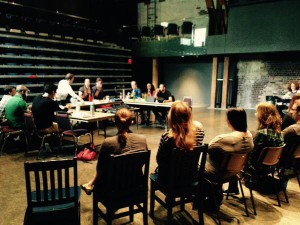 Casting a production is never simple and it represents for me the very best and worst aspects of my job. I both love and loathe this annual process of narrowing a field of over 400 candidates to exactly the right combination of 8-10 individuals.

From one perspective the casting process is filled with unknown opportunities. At any moment someone can enter the audition room and bring that unexpected quality that you didn’t even know you were looking for – one which takes your thinking about a play in new and surprising directions. The challenge is always to create an auditioning environment where, within a very short amount of time (usually 10-15 minutes), a sense of trust and play can be built between the auditioner and the auditionee. And when you do engage with someone in a meaningful way, it’s a great room to be in.

From another perspective, there is the constant knowledge that in nearly 90% of the cases, you’re going to end up saying ‘no’ to the person who walks in the door. This is something I’ve never really gotten used to – even after over 4,000 auditions. It’s a serious downer. Auditioning is an imperfect system: one fraught with both excitement and considerable stress.

The 2011 Bard’s Bus Tour company hanging out with the old Bard’s Bus.

But when you do end up with that right combination of people – actors or who are both new and familiar, who will both trust you and challenge you (and in Driftwood’s case, who will continue to work well together throughout a five-week tour in a small bus) – it is an extraordinary experience.

The journey of casting Hamlet was particularly grueling. It took nearly four months (it normally takes one), involved numerous rounds of auditions and countless phone calls, offers and emails. But the end result is quite frankly one of the most exciting groups of people I’ve ever had the pleasure of bringing together.

Driftwood is very much an ‘ensemble’ company. When you’re working in touring theatre, a cast not only needs to perform well together, they need to get along well enough to enjoy being on the road together for over five weeks and 4,000kms. There needs to be plenty of trust, respect, patience and good humour.

For this reason, I’m thrilled by this year’s ‘core’ company members, Steven Burley, Chris Darroch and Rick Campbell. These three actors are not only among the very best ensemble members, able to deftly and quickly maneuver a number of character arcs, but they are incredible to be on the road with. 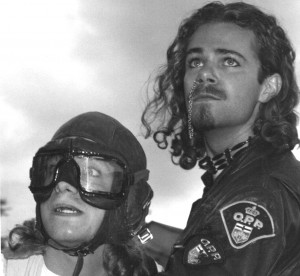 Steven Burley, all the way back in our first show: A Midsummer Night’s Dream, 1995.

They bring ease, camaraderie and a commitment to Driftwood Theatre to the table. I’ve worked with Steven for over 20 years and with Chris for over 10: they are an integral part of the Driftwood family. I’ve admired and respected Rick for over 15 years and we’ve worked together twice. These three know the score when it comes to Driftwood and I trust them wholeheartedly. Christopher Darroch in our 2008 production of Romeo & Juliet

But I also love what new energy brings to the process, and I’m so excited to be in the rehearsal room with our new company members this year, Nehassaiu deGannes, Jon de Leon, Sarah Finn, Natasha Mumba, and Paolo Santalucia. Throughout my limited time with each of them so far, they have all demonstrated a passion and energy for the project that is more than I could have hoped for. They each bring intelligence, passion, curiosity and considerable talent to the table. True to Driftwood form (where pairing emerging artists with established professionals is a stated mission of the company), they represent a range of experience from Natasha, who will make her professional theatre debut, to Nehassaiu, who has worked for some of the finest theatre institutions in North America.

Together, this ensemble has the potential to put some of the very best work on the Driftwood stage our audiences have ever seen. As with any cast, I hope they’ll challenge me and expand my thinking about both the play and my craft, and I sense that they are collectively up to the task of putting together a production inside of a grueling and busy four weeks. I have a feeling they’ll also be pretty stellar people to work and play with as we venture out on the road to 25 communities in Ontario this summer.

Still, you never really know how things are going to work out until you get everyone into the rehearsal hall and start working. At the time of writing this, we have been through one fantastic day together. I couldn’t be more excited.

The play’s the thing…

Speak the speech…
Scroll to top