(or, I once was a shy kid from a small town)

So, you want to know what Shakespeare D&D is about? The easy answer is that it’s a fantasy world where the characters and settings of Shakespeare’s plays co-exist with creatures, gods and peoples of Dungeons and Dragons a tabletop roleplaying game. The trickier bit? D&D is a game rooted in improvisational play. Though I’ve got a framework built, the story is created in real time when we gather on May 15.

But I can tell you another story about how I become a theatrical storyteller because of Dungeons and Dragons.

It begins in the early 80s, when two very good friends of my family – Andy and Scott Nagy – arrived at our house for a visit. Andy and Scott were like older brothers to me and had been partying at our table since I was a baby. On this visit they brought something unexpected. “We have this really great new game,” they told us with glee, “It’s called Dungeons and Dragons.” 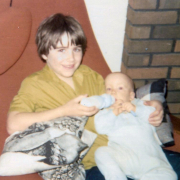 Andy once fed me the nectar of life. Years later he’d poison me with the bite of a green dragon.

During that fateful visit, Andy and Scott led my entire family through our first module (or game/adventure) titled The Keep on the Borderlands by Dungeons and Dragons’ creator, Gary Gygax. And it blew my mind.

For a shy, chubby eight-year old kid there was simply nothing like it. Suddenly, I was a brave and fearless hero roaming the land, fighting dragons and delving deep into crypts, castles, and dungeons. The game sparked my imagination, increased my confidence, encouraged creative thinking and collaborative play. Over the years, I would continue to play this game with friends – in grade school, high school, university, adulthood. Heck, I just finished a game with a group of friends that lasted over fifteen years. 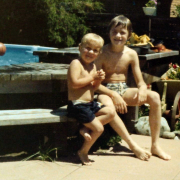 Scott taught me to swim. Later, he’d maroon me on the Isle of Dread.

More often than not, I took the role of Dungeon Master, the individual responsible for guiding the players through their adventures. The Dungeon Master (DM) envisions and describes the world that the players explore, populates it with people, monsters and creatures, and sets goals and challenges for the players. In addition, the DM plays every other person, creature, monster, animal and/or sentient plant (yes, yes you read that correctly) that the players meet. Silly voices, ridiculous props, theatricality and a love of improv are the tools of the trade.

During the pandemic, D&D has been one of the only ways that I’ve been able to create and share stories with others. Thanks to the wonders of modern technology, I was able to gather with friends at a virtual table over the internet where we could continue to explore the depths of our imaginations.

At its core, D&D is an exercise in collaborative storytelling, very much like theatre in many respects. The countless hours I’ve spent creating adventures, diving into characters and developing narratives with a group of like-minded individuals has informed and enriched my professional life as a director of live theatre, and vice versa.

And so, as Driftwood began to imagine how we might work our way back towards sharing stories with people in live settings, it only felt natural to invite everyone to join us at the table and experience this strange, wonderful, wacky, and powerful game (but with a Driftwood twist).

Shakespeare’s plays are filled with traditional elements of fantasy roleplaying games: monsters, dragons, witches, magic, interfering gods, epic battles, ghosts, wandering bards. His plays are an embarrassment of riches for anyone looking for adventure hooks and ideas for D&D. And like the best Shakespeare, I’m taking ideas and tweaking them a little. Events and conflicts in Shakespeare’s plays might not occur exactly how he wrote them. This provides us with a rich backdrop upon which to set our own adventures and puts a bit of the unexpected back into these stories we’ve known and retold for over 400 years.

Each of the six players of Shakespeare D&D have been asked to draw inspiration for their character from Shakespeare’s tertiary characters, and imagine why those individuals might have taken up a life of adventuring. What they’ve come up with is marvelous and playful, a truly fascinating group to embark upon the adventure that I have in store for them.

Being an audience for Shakespeare D&D will be a lot like being in the audience for a play. It’s just that this story is entirely improvised on the spot and the imagery, setting, and conflicts which take place will live only in our collective imaginations. And that’s another beauty of D&D: everyone’s experience – the DM, the players, each audience member – will be just a little different, coloured by the visions they create in their own minds based on the description of what’s happening in the story.

I can’t imagine a more theatrical and unique way to welcome people back to Driftwood and set the stage for our new vision of good people sharing great stories. For people who love Shakespeare, Shakespeare D&D will hold a treasure of characters and elements from his plays but with wonderful and unexpected surprises. For me, it’s a chance to play a ridiculously fun game with some fabulous people as we embark upon an adventure together into the unknown. What could possibly be more exciting than that?

PS: Andy and Scott, on my next birthday we’re playing again! My dad and brother also made it through those early adventures (and apparently drank some Ent water along the way). And we still gather when we can with dear friends Andy and Scott. 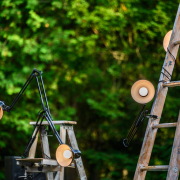 After nearly three years, Driftwood Theatre is finally moving forward with hope of a return to live, outdoor touring summer theatre. We’re looking for some creative, outgoing and friendly folk to help us manage, create, and celebrate our plans for The 2022 Bard’s Bus Tour.

Driftwood Theatre is committed to reflecting Canada’s rich diversity in all aspects of our work We encourage and welcome applicants from all backgrounds and will prioritize applicants who identify as Black, Indigenous, People of Colour, Women, Gender minorities, 2SLGBTQ+, d/Deaf, Disabled/People with Disabilities, and/or Neurodiverse.

The following positions are made possible with the generous support of Canada Summer Jobs. Candidates must be between 19-30 years of age and be a Canadian citizen, permanent resident, or person to whom refugee protection has been conferred under the Immigration and Refugee Protection Act.

Here’s a list of what we’re looking for (full postings below). If you think one of these is you, please reach out!

To apply, send a covering letter and resume (as a single PDF document) to Artistic Director, Jeremy Smith at jsmith[at]driftwoodtheatre[dot]com.

Reporting to the Manager of Development and Communications, the Event Marketing and Outreach Coordinator will be responsible for acting as a liaison between Driftwood Theatre and our community partners for all projects and activities related to the 2022 Bard’s Bus Tour.

Reporting to the Manager of Development and Communications, the Communications Coordinator will be responsible for coordinating all aspects of online publicity and communications for Driftwood’s 2022 summer programming, including Community Play and educational displays/activities related to the Bard’s Bus Tour.

Reporting to the Producer, the Front of House Manager will be responsible for delivering a safe, orderly, timely and enjoyable theatre experience for Driftwood’s audiences, presenting partners, volunteers, donors and company members.

Reporting to the Production Manager and Production Designer, the Wardrobe Coordinator will be responsible for styling, sourcing, purchase and build of all wardrobe for Driftwood Theatre’s 2022 Bard’s Bus Tour projects.

Reporting to the Manager of Development and Communications, the Web Marketing Coordinator will be responsible for coordinating all aspects of digital engagement programs as part of Driftwood’s summer programming, including Community Play and educational displays/activities related to the Bard’s Bus Tour. 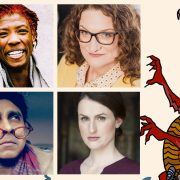 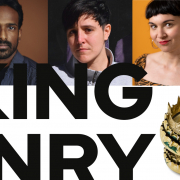 Driftwood Theatre Group is excited to announce plans for their return to the road with The Bard’s Bus Tour. Back for the first time since 2019, Driftwood will present King Henry Five, running throughout Southern Ontario from July 14 – August 21, 2022.

An ambitious adaptation of three Shakespeare plays (Henry IV pts 1 & 2, Henry V), King Henry Five is a powerful story about community, the families we inherit and those we choose, and the legacies we leave behind.

Set against the backdrop of an contemporary patio bar and featuring Driftwood’s signature blend of music, puppetry and Shakespeare’s captivating poetry, King Henry Five rolls into outdoor community spaces across Ontario this summer.

“By the time we hit the road in July,” says Jeremy, “it will have been three years since we were last face-to-face with people across Ontario. I can’t wait to share this epic story and the work of these extraordinary artists with our audiences.”

Tickets for King Henry Five are now on sale online at driftwoodtheatre.com. In keeping with Driftwood Theatre’s vision of theatre for all people, all tickets are available for Pay What You Can Afford admission. Audiences are invited to select from four one of four  set admission prices ($5, $35, $50, $75) which best suits their circumstance.