Text Adapter and Dramaturg Toby Malone shares the story of how the text for Driftwood’s Hamlet came to be.

I feel like it started out as a dare.

It wasn’t a bet, but it certainly felt like a challenge. In early 2012 I was in New York City attending a Shakespeare workshop run by Sandy Thomson, artistic director of Scotland’s largest permanent ensemble, called Poorboy Theatre, based in Auchmithie, a tiny fishing village not far from Dundee.   Sandy’s relationship with Shakespeare was all about the scripts’ visceral immediacy, and she told me all about Poorboy’s attempt to dive in to the plays in such a way that would honour the writing while still maintaining the primacy of actors’ impulses. She had designed a concept called ‘Blast Shakespeare’, where her ensemble would gather to be (sometimes randomly) assigned roles in a Shakespeare play, sight-unseen. The ensemble then threw themselves into the process and staged the play, at pace, without stopping, from top to bottom, with scripts in hand and roaming all over the venue in a promenade style. Then a lunch break, then the audience arrives to watch the tumultuous performance. 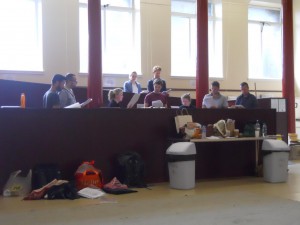 Sandy had staged a number of these ‘Blast Shakespeares’ when we first met, including a go at Hamlet in two versions: first the lengthy (4000+ lines), familiar 1623 Folio copy, and then later, for fun, the less-known, much shorter (nearly half the length) and rougher (“To be or not to be, ay, there’s the point”) 1603 First Quarto. The 1603 Quarto has in the past been called the ‘Bad Quarto’ for its flaws, but Sandy marveled at the pace of the piece, and the way the scenes flew by, unlike the austere, beautiful-sounding Folio version, which took four hours to ‘Blast’ and nearly killed the actor playing Hamlet. She mused aloud, over breakfast (and hilariously kitted out from head to toe in tartan for a Scots parade later that morning), that wouldn’t it be interesting if we could find a way to combine the line and scene structure of the First Quarto with the lovely poetry of the Folio? No worries, I said. I’ll whip something up. 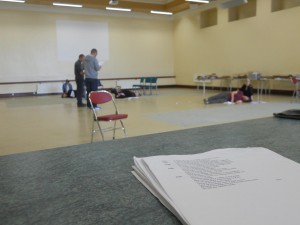 A few months later, I had combined the text through parallel-text comparison, and uncovered a script worth testing. I left nods to the First Quarto in the script, along with some unusual character names (Polonius is Corambis, for example), and found that aside from some interesting speech restructuring, the play hung together nicely. Then it was off to Glasgow to join Sandy and the Poorboys to see if it worked.   With a stunning cast of game Scottish actors, and a Hamlet played by RSC regular Brian Ferguson (who recently played the role at Glasgow’s Citizens Theatre in a 4-star performance the Scotsman called ‘nervy and furious’), this new version of the script – cheekily retitled The Hamlet Variorum – absolutely flew. We performed the text in a stark Glasgow church hall and I could not get over the energy lent by the Scottish bravura, along with the nuance that the local accents allowed. Thrilled with success, Sandy committed to come to Toronto to try it again, this time with local actors.

Staged at the Luella Massey Studio at U of T, this new Blast featured Driftwood alums Chris Stanton (Macbeth), Geoff Pounsett (Trafalgar 24) and Tim Machin (Macbeth, Twelfth Night), an imported Poorboy in our Hamlet, Jeremiah Reynolds (who played the title role in one of the early Scottish Blasts), along with our future Driftwood Hamlet, Paolo Santalucia, who did his apprenticeship in the roles of Rossencraft, Voltemar, Barnardo, the Second Gravedigger and the Player Queen. Roaming around the falling-down former Russian Orthodox church, watching the creativity flow from this committed group, we knew we were on to something. But it was still an experimental script. When Jeremy asked me to think about how Hamlet might be edited to fit a Driftwood season, I gave him The Hamlet Variorum as food for thought, not as a potential solution. I am both gratified and terrified that he has so wholeheartedly embraced this script, and am very aware that people may miss the ‘old’ version. Regardless, I’m excited by the potential in allowing this structure to breathe, and with such a stunning cast I have no doubt that it is going to fly. It’s an immediate, visceral take on the play: actor Peter Guinness (who incidentally played Claudius opposite Brian Ferguson at the Citz) once called the First Quarto “Hamlet with the brakes off.” In today’s culture, brakes are the last thing we want on Shakespeare, and a tumultuous, riotous approach to this script feels right for us and the Bard’s Bus Tour.

I keep thinking of this as the last phase in an experiment that I can then publish on, but it’s more than that. It’s a reminder that behind the famous words and speeches remains a family drama reeking with urgency and pace, and we don’t get to see that very often.

I’m so very excited to get started.

The actors are come hither…
Scroll to top