Hatched over a single night right before the onset of the Covid pandemic in 2020, Gloria Mok’s Diminished is about to wrap up its first full phase of development.

What began as a short, 10-minute piece set among an upper hallway of Whitby’s Trafalgar Castle has emerged as a full length, two-act play which explores the relationship between a precocious and lonely 11-year old girl and a tightly-wound piano tuner. 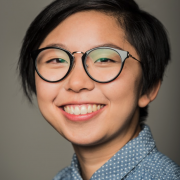 When the 10-minute play first premiered at Trafalgar 24 on March 8, 2020, it was both the jury and audience choice for Driftwood’s Beyond the Bard Residency prize. In the fall of 2020, Gloria began work to expand the play, first fleshing out a full one-act and most recently adding a second act to further explore this unique and touching relationship between teacher and student. Gloria’s work has been supported by a dramaturg and regular meetings with members of Driftwood’s Playwrights Unit.

Multiple drafts and many conversations later, Diminished is now ready to welcome more creative partners. During the week of December 6, Driftwood will bring together a group of artists in-person for the first time since that 2020 Trafalgar 24 event. “Not only is this a fitting and highly anticipated return to working with artists in physical space,” explains Driftwood Artistic Director Jeremy Smith, “but it’s also the perfect way to close out this very strange year – working with a fabulous group of people to support the development of a beautifully crafted story.”

The week-long workshop will focus on the development of the play’s second act.

Though no public reading of Diminished is planned at this stage of development, keep your eyes peeled for future news about Gloria’s charming, funny and open-hearted play.