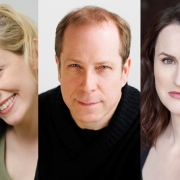 With just over two weeks until William Shakespeare’s A Christmas Carol by Ian Doescher rings in the holiday season at Town Brewery in Whitby, Driftwood Theatre is thrilled to announce the cast for this exciting Play in a Pub.

In true Play in a Pub style, audience members will be given an opportunity to play a role on stage through the Memorable Character Live Auction, featuring roles like Tiny Tim, Juliet’s husband Paris, the troubadour Balthasar, and Hamlet’s Dad (the ghost of Christmas future).

Carrying on Driftwood’s fine tradition of informal readings of plays over a pint, William Shakespeare’s A Christmas Carol is a holiday mash-up you don’t want to miss. This Play in a Pub is sure to be a jolly, interactive affair as audience members join Driftwood Theatre’s professional performers in reading, singing, and celebrating a holiday masterpiece.

Driftwood Theatre is Ontario’s leading outdoor, summer theatre company, on the road with its award-winning Bard’s Bus Tour for 25 years, reaching over 46 communities and 100,000 people across Ontario. We believe in theatre for everyone in Ontario, regardless of where you live or how much money you might have in your pocket. Driftwood Theatre is generously supported by the Ontario Arts Council. Play in a Pub is a fundraising event in support of Driftwood Theatre’s annual summer Bard’s Bus Tour.

Town Brewery is a craft brewery in Whitby, Ontario dedicated to enhancing the lives of everyone involved with their brewing process from grain to glass. They strive to create good jobs for local people by producing beer made from quality ingredients, while being actively involved in local community projects and events. Better Beer. Stronger Community.

Play in a Pub: William Shakespeare’s A Christmas Carol, by Ian Doescher

This is an all-ages event.