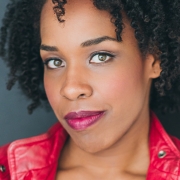 (Or, How I became Driftwood Theatre’s Playwright-in-Residence)

Creativity, much like love, is a frustrating alchemy—the more you chase it, the further away it gets. If you really hope to make something extraordinary, you gotta relax and let it happen. In other words, let the gold find you.

I can’t tell you a magical formula to conjure inspiration. But I will say that whenever she decides to pay me a visit, I let her do whatever she wants. She’s like an old auntie that I’m afraid to piss off. Which brings me to the crux of this tale: Say Yes, and…

The golden rule of improv is how I won T24. No kidding.

Last year, I auditioned for Driftwood’s Bard on the Bus tour. Artistic Director D. Jeremy Smith sent me (and I say this without sarcasm) the nicest rejection email I have ever received. It left me feeling motivated to try again in the future. He offered a small consolation: would I like to perform in the Trafalgar 24 festival? Nope! I wasn’t moving my work schedule around for a one-night only event. And if we’re not going steady, you can’t take me to prom Jeremy! Petty? Perhaps.

Luckily, Jeremy counter-offered: would I like to write in the Trafalgar 24 festival? My writing experience is at the bottom of my actor’s resume, and most directors don’t even bother to ask about it. But he did. And that small gesture made my Grinch-heart double in size. It whispered to me, “This feels right. Do it.” So, I said yes, and…

Then I got to write a site-specific play in a frickin’ castle and I got to meet some other amazing artists! That night I was a woman obsessed: I worked 8 hours straight without breaks.* I turned into some weird vending machine—shoving in pizza and then dispensing words on the page.

For some reason, inspiration decided that my play could only take place inside a brain. I questioned her at first, but then she threatened to leave and take her sweet potato pie with her. So I said yes, and…

I let the story be as ridiculous as it wanted to be. I was unconcerned with how it would be received. Whatever I submitted at 6am would be something I enjoyed reading. That was enough for me.

In all honesty, I was planning on losing T24. Seriously. I had rehearsed the moment in my mind, as well as my best I’m-so-happy-for-you-because-you-totally-deserved-it smile. They’d call all the playwrights up on stage. Jeremy would announce that the laundromat musical won (it was charming AF), then I’d smile and wish them well. Maybe hit up that dessert platter on the way out. #BLESSSSSSSSED.

But then I won. That wasn’t supposed to happen. I was just writing for the hell of it. Somehow that landed me this gig. I’m pretty sure it had something to do with my reckless abandon. And so, I offer it to you. Maybe the secret to inspiration is to give her carte blanche. You have no idea how things will play out, and for whatever odd reason, you’re okay with it.

Alicia Richardson is Driftwood’s 2018 Playwright-in-Residence, working on her play Solve for X, which was first written for Trafalgar 24, 2018. Join us for FREE readings of selections from Solve for X on July 28 (Toronto), August 5 (Peterborough) and August 12 (Port Perry). Visit driftwoodtheatre.com for details, or call 416-605-5132.