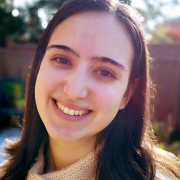 Congratulations to Elyssia Giancola from Brampton, our Ontario Storybook winner!

Elyssia has chosen to use their $100 gift certificate at Michael’s Back Door Restaurant in Mississauga.

Read Elyssia’s inspiring submission using the prompt, “Tell us the story of your best friend”:

I met my best friend on the first day of high school in fourth period English, my last class of the day. I was sitting in the centre of the front row when someone came in and asked if they could sit next to me. I said yes. She sat down and we started chatting, comparing schedules and the like. We discovered that we’d already been in two classes together that day and hadn’t realized.

The next morning was a difficult one for me. I didn’t know it at the time, but this would be the first of many days I experienced crippling anxiety in high school. That morning, I stood outside my first period class – phys ed, as if things weren’t already bad enough! – and could not stop crying. I wanted to run, I wanted to hide, I wanted to be anywhere but school. I didn’t know what to do. And then, the girl from English class arrived. She put a hand on my arm and told me it was going to be okay, in a way that wasn’t condescending or pitying but truly, genuinely kind. She walked me into class that day, and she would walk me through countless other days in the years to come.

My best friend has the most beautiful heart of anyone I have ever met. When I talk, she listens with curiosity and compassion. There is not a judgmental bone in her body. When I am lost, she somehow always knows what to say to set me back on the right course. She makes me want to be the best version of myself because that is the version of me that she sees.

In the years since high school, we’ve never lived in the same city at the same time, so we see each other rarely. Indeed, because life gets busy, there have been years where we’ve hardly even spoken, aside from a quick check-in here and there. Nonetheless, there is no one I feel more comfortable with, no one I trust more. And because of the amount of time we spend apart, we have a little tradition. When we do get the chance to see each other, she writes dozens of notes and hides them around my room. Some are drawings, some are inside jokes, some are affirmations. I find some of them easily, but others surprise me weeks, months, or even years down the road. In fact, some are still hidden somewhere, waiting to be found. They always bring a smile to my face and a warm feeling to my heart, just as my best friend always has.

And that’s the story of my best friend!

Thanks to our Restaurant Partners

We want to send out a huge thank you to all of our restaurant partners across Ontario for being a part of our Storybook this summer. The contest may be over, but you can still support your local diner or pub by getting a delicious meal for dine in or take out! Read the stories of all of our restaurant partners and decide where you want to eat next here.

Our amazing restaurant partners from across Ontario shared their stories with us; tell us your story for the chance to win a $100 gift card for a night out at one of these restaurants!

In the mid-1800’s, there was a man by the name of Dan McDonald. He worked in a dry-goods store and could be commonly found moving 400 lb barrels of goods about the shop. In fact, he once lifted a platform of 4 barrels of ale on his back; and even better, he hoisted a 500 lb pig over his head in the town square! These great feats of strength earned him the name of “Strong Man Dan.” So, as you could imagine, we were delighted to find out that “our man Dan” once lived on the very same property as the Ashburnham Ale House. As such, we have an artist’s rendition of our image of Strong Man Dan hoisting the pig above his head to pay homage to a man that was very much a part of our community in its earlier day. Cheers to you, Strong Man Dan!

I originally worked in a hotel in Hong Kong and came to Canada in the early 90s. I first started working for the Oliver and Bonacini group, then I became the head chef of Mondo and Tosca Banquet Hall. In my mid-20s I had a dream of owning my own restaurant and was thinking of naming it Chives. I had this idea that I would open many restaurants, all named after different herbs. When my wife, Marita, and I opened our restaurant in 2005, the name Chives was taken so we decided to name our restaurant after mushrooms instead, like porcini, shiitake, etc. We ended up naming it Chanterelle Bistro, but quickly realized that one restaurant was more than enough for us to handle. We’ve now been opened for almost 15 years, and we’ve been incredibly lucky to have such a supportive community behind us.

Three Kretans was opened in 1996 by Angelo & Doxa Makrydakis. The name Three Kretans tells a bit of Angelo and Doxa’s story – they have three sons and are from the island of Crete in Greece. Angelo and Doxa’s son, Niko, completed chef school and took over the restaurant in 2010. Three Kretans truly is a family business, as Niko’s wife Gina and both of his parents help out with the cooking, serving, and daily operations of the restaurant. The Makrydakis are long-time friends of the theatre community, with the Centre in the Square and Registry Theatres just across the street. They go the extra mile to make things easy for theatre-goers by offering them complimentary parking and a theatre menu that allows them to get in and out quickly, ensuring that they’re on time for their performance.

Nice-Bistro restaurant has been part of historic downtown Whitby since 1993. Family owned & operated, they offer classic French dishes made with the highest quality ingredients and infused with a Mediterranean flair. The atmosphere transports you to a little neighborhood bistro in France. Come for the food, stay for the experience.

In 2012, having grown up in Muskoka and sharing a deep love for the region, Kevin Duynstee and his wife Brittany founded a brand new restaurant in the heart of Port Carling, Ontario and named it “Loondocks” after the local bird whose beautiful calls echo the lakes at night. They created a fresh new destination offering quality casual fine dining to both cottagers and tourists. They received overwhelming support, including articles in the local media, as they became known for great service and outstanding quality at a fair price. In 2018, to be closer to family, Chef Kevin and his wife Brittany relocated Loondocks to a beautiful new space at Appleby Village in Burlington. The entire Loondocks team is very pleased to be serving this community, and proud to offer our award winning fine dining experience to the residents and visitors of Burlington and beyond.

We opened Chúuk opened 2 years ago. As a third generation restauranteur I had the amazing opportunity to operate a restaurant in the same location as my father, and my grandfather before him. Our initial goal was to offer Durham Region something different, an experience similar to something our guests would be familiar with enjoying downtown. Chúuk is inspired by the vibrant culture and traditions of Mexico, and we look forward to serving our community for many more years to come.

Established in 1981, Michael’s Back Door Restaurant has been providing Mississauga and the GTA with award winning Italian cuisine and professional courteous service in a warm, comfortable atmosphere for over 35 years. Principal owners Michael Morra and Michael Morra Jr., along with partner Anthony Coffa, invite you to experience creative Italian, continental fare, offering the freshest ingredients and a variety of rare wines. Executive Chef, Mark D’Souza, joined Michael’s Back Door in 2015.  Since becoming the head of the kitchen, Mark and his team have focused on adding a modern twist to our traditional rustic and regional Italian dishes. Whether you are looking for a quick, casual family dinner, a romantic night out or an opportunity to catch up with friends, Michael’s Back Door has the perfect table for you!

We fell in love with Prince Edward County – like everyone does! After a weekend invite to help harvest with friends at Domaine Darius, we began our journey to find our place in The County. 1705 County Road 12 was exactly what we wanted! An existing roadside restaurant adjacent to the dunes at Sandbanks, a big backyard and a few acorn trees; our ideal location for the Sand and Pearl Oyster Bar! Our intention is to welcome everyone to share in the the things we love; Great Food, Friends & Family, Campfires, Yoga, Music, Theatre, Art and Joy. Join us in the summer and fall in love too.

El Camino, also known as The EL, is owned and operated by Amanda and Greg Leng. Greg and Amanda came to Northumberland almost four years ago, making the move from Toronto in favour of a small town life. The couple loves to travel, and they create the menus at The EL and vibe at the restaurant based on their global travels and what inspires them.

Since 1998, The Auld Spot has been a community space on the Danforth in Toronto with great food, drink, music and people. Over the years, the pub has seen many stories of romance, heartbreak, celebration, sorrow, friendships and food. The Auld Spot  would love to hear your story!

“Donattela Bar and Grill, a name which pays homage to my wife’s Grandmother, was established in 2004. Having taken a wrong turn, my family ended up in the town of Bobcaygeon; where the scenery and generosity of the community spoke to us. Deciding to call this town home, we soon began the plans to establish a restaurant that aimed to create finer dishes, yet still encouraged a relaxed and laid back atmosphere. Generations of love and dedication are felt in our dishes, and we would love the opportunity to share our passion for dining with you. ​From our familia to yours, Buon Appetito!”