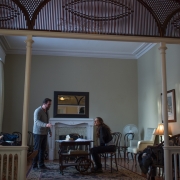 Briana Brown is Driftwood s Playwright-in-Residence, and our current Beyond the Castle playwright. Her play “Robert” was the winning script at last year’s Trafalgar 24. Since Then, Briana has been “embedded” with Driftwood working on “Robert” and other ideas.

I tend to carry stories with me for months, or sometimes years, before they first find their way into a draft. I scribble notes in individual notebooks, send emails to myself from my cellphone, and covertly steal scraps of magazine articles from the dentists’ office. I know my characters like they’re family. When I imagine their location, it is with deep nostalgia. I collect all these pieces until slowly the story surfaces. And then I write it. (And rewrite it and rewrite it and rewrite it.)

From the beginning, the process with Driftwood has been the opposite. In the castle (oh I still love writing that), I pulled something from the air and crafted it into a scene within hours. All that existed of these characters and the world they inhabited ended up on the page immediately. I didn’t have time to consider my choices as obsessively as I tend to do. I was consumed with one thing: “how do I create a scene that works?” It was a fantastic exercise, and I hated almost every minute of it, spending much of the night wondering why on earth I had put myself in such a frightening position, and more importantly why had I invited the man I had just started dating to come see it? Then I saw the play – beautifully staged and performed, mere hours after I’d written it. Which is a truly special experience, and one for which I was very grateful.

Through the Beyond the Castle program, and with the support of the Ontario Arts Council, I have been gifted the luxury of space and time to step back and consider what it is I’m interested in exploring through the premise and characters I created in a panic in the middle of the night last February. Crafting what was a beginning into a full play has been a process of pulling the rest of this story from the air, and following the breadcrumbs of what I’d written to lead me where they want to go.

I think my biggest hurdle so far has been trust. (Alongside overcoming the panic that comes with a lack of trust.) Trusting that these characters will continue to reveal themselves, that there is a story, that it is a story worth telling, that it will connect with an audience and that I, as the ever-doubtful writer, am worthy of telling it. It has been challenging and exciting to engage with the act of writing in a new way, and to force myself into a place of trust and commit the pen to page before I feel “ready”.

Now that I have a first draft behind me, the process feels slightly more comfortable, something I’ve embarked on before, with all its questions and possibilities. Our first dramaturgical session felt good. I was glad to discuss the larger questions of the script, and to get a sense that things are resonating, or are beginning to. The meeting provided me with additional avenues to explore, paths to travel down, and questions to consider. And once again I need to trust — that one of those threads will feel “right” and take me where I, and these characters, need to go.