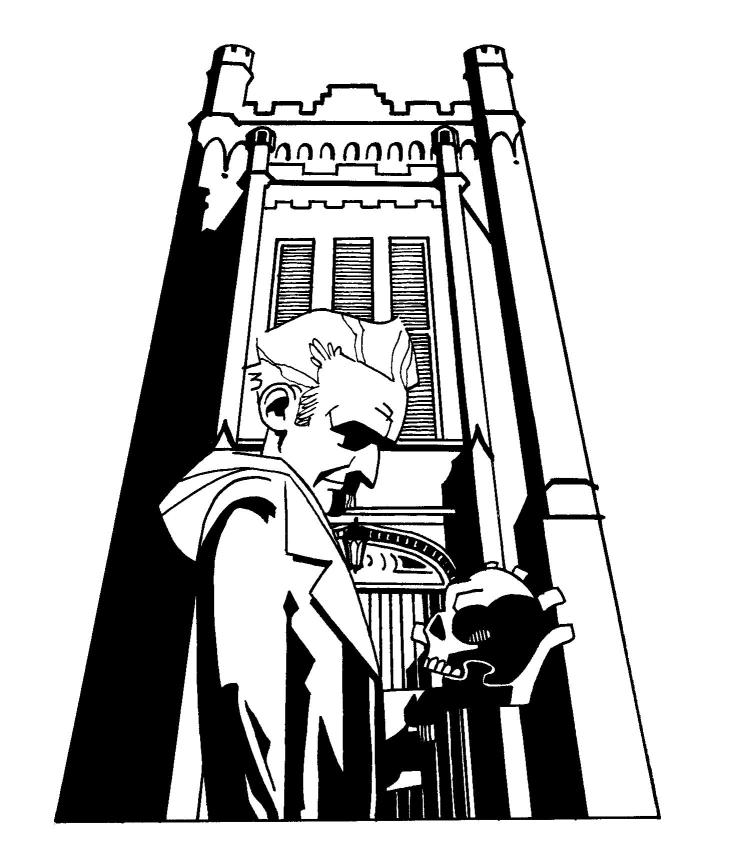 The true story about the first Hamlet produced by Driftwood

Back in 2002, before the days of our annual Trafalgar 24 festival, I was fortunate enough to get a tour of the beautiful Trafalgar Castle School in Whitby, and immediately began planning an event to take place in and around the 19th century castle standing on its grounds.

That project became our first fundraising event at the castle—Trafalgar Hamlet, featuring (now award-winning director of Stratford, Soulpepper, Tarragon and theatres across Canada) Alan Dilworth in the pivotal title role.

It was unique not only for using the castle and grounds to create a site-specific theatre experience, but because the audience was also divided into five groups, each following a different set of characters. The entire play was then presented simultaneously. Audience members were only privy to the scenes featuring their characters. They traveled in, around and outside of the castle on what I recall were two suitably cool and wintry nights in March of 2003.

Guests were invited to dine on a fine meal during intermission, and the dining hall became the setting for the famous ‘mousetrap’ scene of Act 3, Scene 3—where a troupe of players perform the play which convinces Hamlet of Claudius’ role in his father’s murder.

Further adding to the drama of Trafalgar Hamlet was a massive power-outage affecting half of the town of Whitby, where the castle is located, on the evening of our first performance. From the time audience began arriving until about 30 minutes after the performance was set to begin, the castle interiors were pitch black. Safety regulations forbade us from conducting the event in the dark, and so audience members were confined to dining lounge by candlelight at a pre-show wine reception until the power came back on.

I’ll never forget it—I was on my way to the dining hall to announce that we’d be cancelling the evening’s performance when the power suddenly came back on. The entire cast breathed a sigh of relief and we quickly got things underway.

The ghost appeared down by the front gate, Hamlet delivered his famous soliloquy on the main hall staircase, Claudius knelt to pray in the chapel, and Ophelia drowned in the indoor swimming pool.

I have always loved this incredible play and look forward to the challenges of directing it for the outdoor summer stage, but I will never forget that first Driftwood Hamlet experience.

It is not in the stars to hold our destiny…

The play’s the thing…
Scroll to top