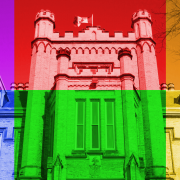 In celebration of Family Day, Driftwood Theatre is offering a 20% DISCOUNT ON GENERAL ADMISSION TICKETS to TRAFALGAR 24 for 24 hours.

Guests are treated to not one but two fabulous receptions (wine & cheese and dessert), a groovy silent auction with something for everyone, and six entirely original short plays created in under 24 hours by 24 theatre playwrights, directors and actors.

No Trafalgar 24 event is ever quite the same! What stories lurk inside the halls of Trafalgar Castle? Join us on March 8, 2019 to find out! 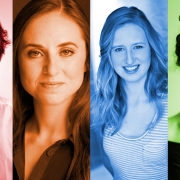 Driftwood Theatre launches its 25th season with another adrenaline-fueled visit to Whitby’s Trafalgar Castle for a festival of site-specific plays created in 24 hours.

All the castle’s a stage as Driftwood Theatre kicks off its 25th season with the most unique site-specific theatre event around, TRAFALGAR 24. Over the course of one day, 24 theatre artists from across Ontario will descend upon Trafalgar Castle to write, rehearse and perform six new plays set within the rooms, halls, nooks and crannies of Whitby’s very own 19th century castle.

Supporting the work of emerging playwrights from across Ontario, Driftwood is thrilled to announce this year’s six participating playwrights.

TRAFALGAR 24 is Durham Region’s most unforgettable annual theatre event where twenty-four artists receive a scant 24-hours to write, rehearse and perform six site-specific plays in Whitby’s beautiful 19th century castle. At TRAFALGAR 24 the audience is right on top of the action as each of the 10-minute scripts play out around them in locations throughout the castle. TRAFALGAR 24 audience members play a vital role of their own, helping to select on winning playwright to receive a five-week paid summer residency with Driftwood Theatre to develop their work.

As Driftwood’s signature gala event of the season, TRAFALGAR 24 raises $20,000 annually in support of theatre for everyone in Ontario – no matter where you live or how much money you have in your pockets. It is a sumptuous affair featuring both a wine & cheese and dessert buffet, and a silent auction with some of the best deals around in entertainment, electronics, services and art.

For tickets and information: www.driftwoodtheatre.com/see/trafalgar24/