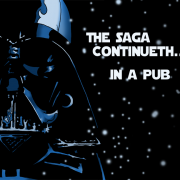 On October 27, the saga continueth…in a pub

Driftwood Theatre’s Play in a Pub returns for a second year!

The stars of Stratford, Soulpepper and the Toronto stage come together in a pub very, very nearby for an evening of theatrical and cinematic mash-up of Shakespearean proportions in support of Driftwood Theatre!

Building on the sold-out success of last year’s Play in a Pub: William Shakespeare’s Star Wars, Driftwood Theatre reunites some of the finest performers of the stage for another epic reading! GET IN ON THE ACTION by participating in the Play in a Pub Live Auction, and bid on one of three walk-on character tracks – rebels, imperials, or droid n’ creatures. GET A GREAT DEAL on some swank merchandise with a rebel-worthy selection of boutique baskets during our Market Auction.

Grab your lightsabers and a pint and join Driftwood Theatre for an evening that is certain to be out of this world.

Tickets are limited, so book early! Book online and ‘share’ or ‘tweet’ about Play in a Pub for a 10% discount on your tickets!